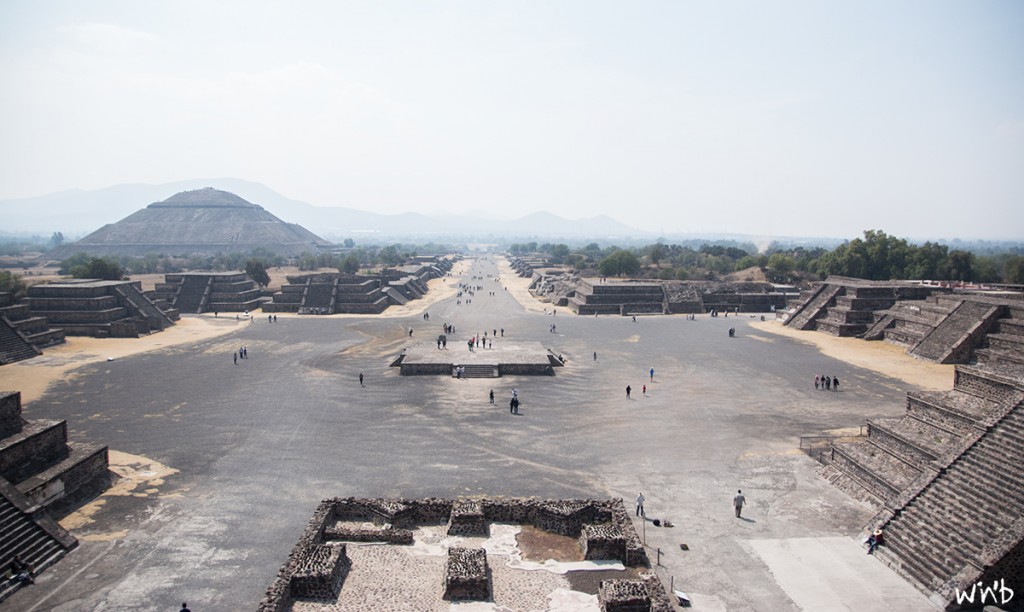 When you climb down the stairs of the Pyramid of the Moon you will see “Quetzalpapalotl” (divine butterfly) to your right, where you can see another great archaeological zone with well-preserved cravings. Have a look and just think of the insane amount of work, people put in this artwork.

This mysterious place was formed between 150 BC and 200 AD and benefited greatly from its plentiful water supply. The largest structures at the site were completed before the 3rd century CE. In the 4th century, the population peaked with up to 200,000 inhabitants, which made it the sixth biggest city in the world.

Due to the water system (Chinampa) the constructors built, floods filled the fields and various fruits and vegetables were able to grow. These vegetables were grown and sold or exported by the citizens. At its peak time, the city most likely controlled – with their feared – warriors vast parts of the Mexican highlands. Around 600 a fire destroyed the city but the pyramides remained populated for a century or two until it got fully abandoned for mysterious reasons.

While traveling we talked to many Mexican people about the potential reasons. The most reasonable theory is a dry period that ruined their fields and the lack of drinking water made the inhabitants flee their impressive home.

Further info for the Pyramids

Besides the very interesting history, there are some things which might be good to know. The following will cover tour guides, the price, and some camera equipment questions.

As in almost any ancient place you can get tour guides in a lot of different languages. Most likely the tours will provide you with a lot of interesting insights of the history. Here and there we sneaked into some tours and listened for a couple of minutes and it sounded really interesting. As we were on a quite long trip through Mexico and Nicaragua we cannot start taking tours in any sight we visit without spending a fortune in the long run. To get a better picture of the pyramid complex and to picture scenes from earlier times while standing on top of the pyramid in the roasting heat we just watched a documentary a night prior to our half-day trip.

Through this, you get a big-picture why and how it was built and abandoned without spending money on a tour guide. 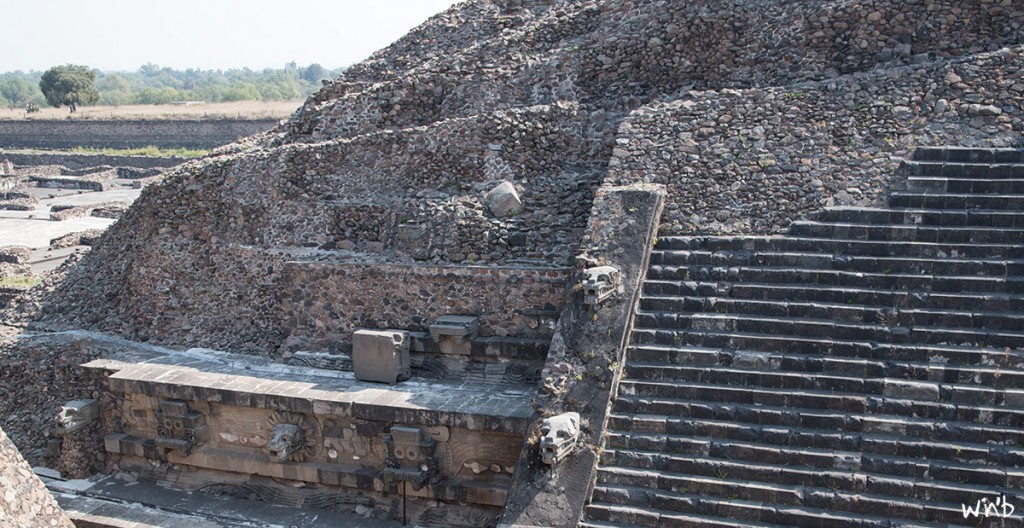 The entrance fee is 70 pesos (USD$3.50). The website says, camera equipment costs extra and would be controlled at the entrance. We have not been controlled and everybody we were in a queue with just paid 70 pesos. Additionally, we have heard that “professional equipment” needs to be registered at an official ministry in Mexico City. As we carried a Xiaomi Yi Action cam with us, a selfie stick, a Nikon DSLR with two lenses and a stand, we have been a bit worried. We have not been asked at the entrance and nobody else had a problem at the entrance. So, we would say – all good. Bring your camera equipment and take some nice photos. 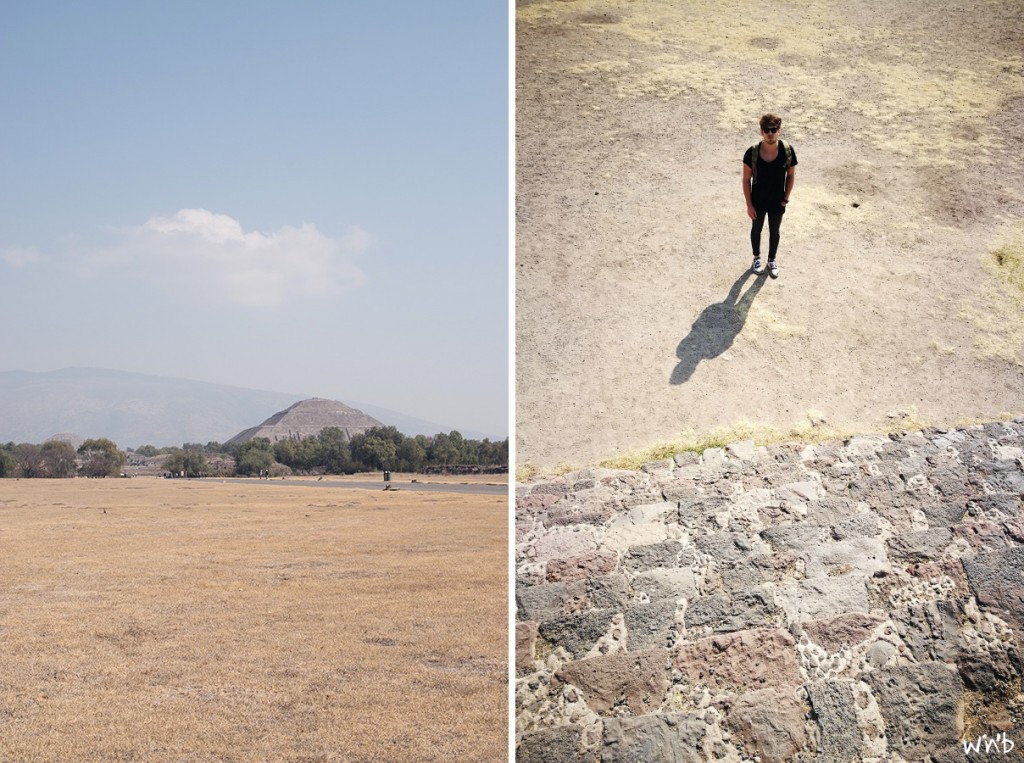 How to get to the “Mexico City Pyramids”

Getting there is pretty easy and takes approximately 1.5 hours from the city center of Mexico City. In our Mexico City travel guide we already recommended taking Uber for various reasons. You hop on an Uber, drive to “Station de Autobuses del Norte”, go to the counter at the very left and buy a ticket (50 pesos) to the pyramides. The bus will take you to the main entrance of Teotihuacán, which roughly takes 45 minutes.

If it somehow suits your busy travel schedule, try not to go on Sundays. Here, the entrance fee is free of charge for Mexicans thus the Pyramids of Mexico City can get pretty crowded.

Side Note: Try to be there early. Even though Mexico City was not very hot in January it became really hot during the day at the pyramids of Mexico City. Sunscreen might be a good idea too. We got our first sunburn in one hour on the pyramids.

➳ You wanna know what Mexico’s capital has to offer? Head this way.
➳ Ore are you traveling to Mexico and still not sure which stops not to miss? Have a look at our Mexico Travel Route!
➳ You are searching for some more tips and infos for your trip to Mexico?
➳ Eager to find the best transport in Mexico?
➳ You want to go surfing in Mexico? Then head over to Puerto Escondido!
➳ Last but not least some relaxation on Isla Holbox? Definitely worth a visit! 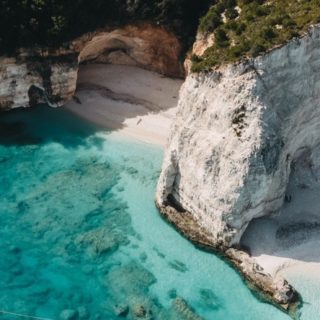 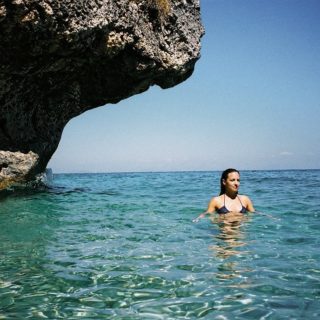