Did anyone say postcard? That’s what Cinque Terre reminds of! Colorful villages built on hilltops surrounded by the ocean and hiking trails. Being located in the northwest of Italy, the national park became a famous tourist attraction during the last decade. In this article we will share a few handy tips on the Cinque Terre Villages and how to make most of your time here.

If you speak a tiny bit Spanish or Italian, the name might have told you already. Cinque Terre (literally translated with “five villages”) is not one single village on its own but ‘five villages’ located directly beside each other. The centuries-old seaside villages are connected by a train which makes it incredibly easy to get from one to the other. The Cinque Terre villages on the Riviera coast, are comparable to each other but at the same time have different perks.

The five villages of Cinque Terre

Let’s first jump into these characteristics of each of the villages and set the basis for your decision. Ice cream in Riomaggiore? A little beach trip to Monterosso? All up to you!

Riomaggiore is the biggest of the five villages and welcomes tourists with colorful houses built in cliffs in the typical Ligurian style. Along the tiny promenade, you’ll find some restaurants offering food and drinks with a view. The picturesque little harbor is carved out between the rocks and attracts tourists to take the perfect Instagram picture. This makes the village, especially around sunset, pretty packed.

Keep on walking on the left, around the corner it will be much calmer. While everyone tries to capture the golden hour facing the village, have a look at how magical the ocean looks during this time of the day.

The village with the tiny harbor also faces the ocean and has some great food options for seafood lovers. The famous Via Dell’Amore used to start here but after a landslide in 2012, it is closed. As it is supposed to re-open again, have an eye on it! Perhaps you are lucky and it’s opened when you are here. If that’s the case, you can walk along the scenic coastline straight to Riomaggiore within 20 minutes! 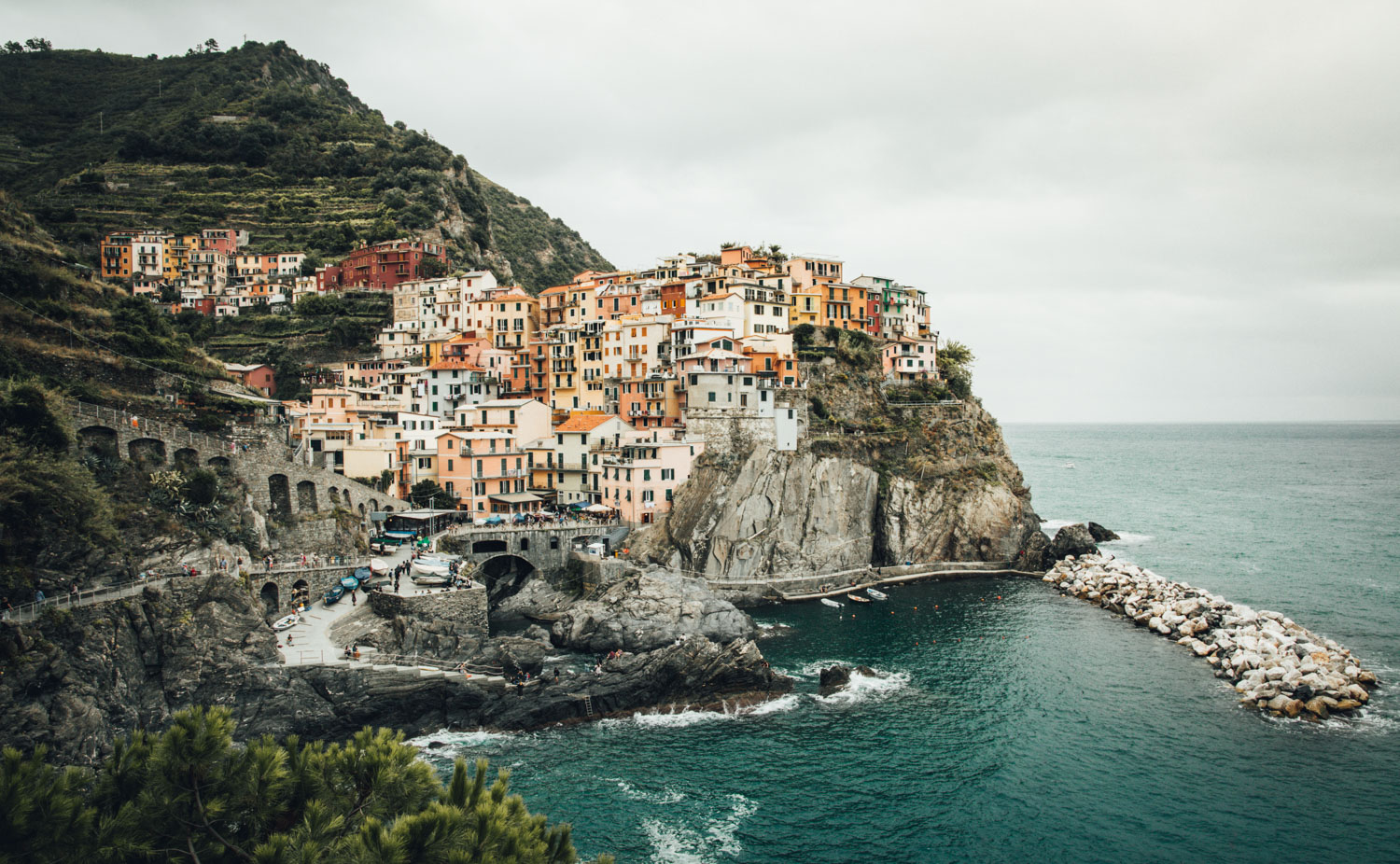 The train that connects all villages doesn’t stop in the city center of Corniglia. Perhaps that’s the reason that it’s the least visited of all five. However, we saw many people hiking towards it from one of the other villages.

Most likely the most picturesque of the villages of Cinque Terre. The paths around the little town allow incredible views on the colorful houses of the harbor town. Due to its beauty, it’s also the most-visited village. For photographers certainly a great place to be. However, our recommendation is to come early. 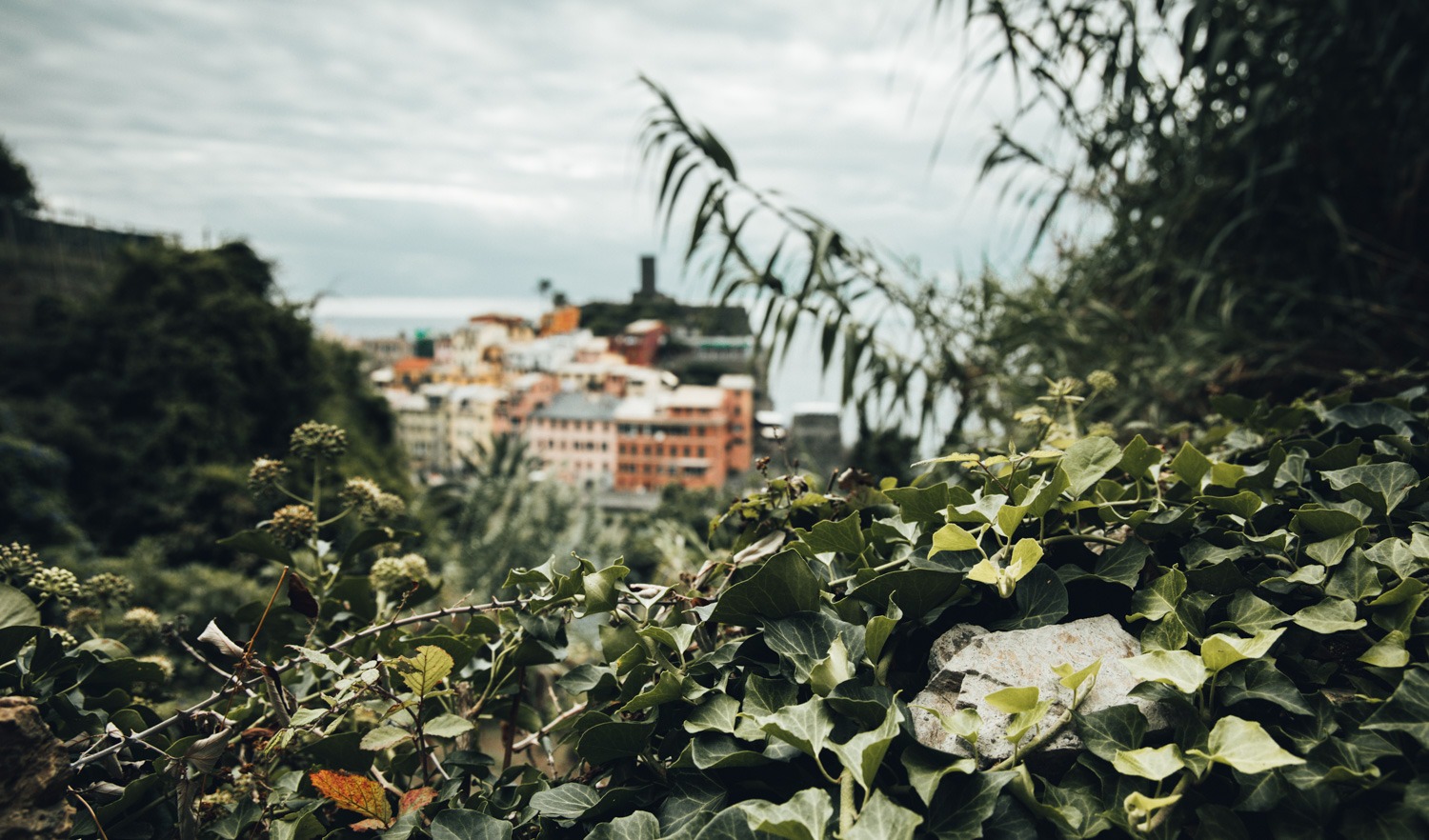 Some of the photo locations got ‘destroyed’ by high fences or rails, not allowing tourists to position themselves perfectly in front of houses in the background.

The Piazza at the harbor is supposed to have a few pretty good restaurants.

The biggest of all five, least picturesque but a beach – that sums up Monterosse pretty well! If you have a bit of time for a day at the beach, consider Monterosso, too! Here, you can also rent kayaks and explore the caves close by.

Things to do in Cinque Terre

When in Cinque Terre, you most likely want to get a taste of the five villages and people living there. The train and hiking trails make that really easy.

Due to its sheer beauty and the low difficulty to reach it, the beautiful Cinque Terre villages can get crowded during the day. As many tourists go for day trips to the villages, the little gems are most crowded between 9-5. So we recommend being early!

We took the train shortly before 8 am and that was already too late. Be earlier! Aim to be there around 7 am. Then you have plenty of time to explore the sleepy villages before the crowds arrive.

After early morning strolls, we suggest to put your walking boots on and explore the hiking paths around the villages. Here, “traffic” will be lower than in the villages itself. Perhaps you could even try to hike between all the villages and end the days with tired legs and craving for some good Italian pasta.

The hiking path, known as Sentiero Azzurro, connects all villages. The 12 km (7 miles) long coastal trek is a great way to fully explore the villages and the national park around them. The train gets you from A to B fast while the trek allows you to understand the full beauty of the region. At the entrance, you’ll be charged a few bucks. More info on all treks in the national park can be found here.

Being not part of the national park, Portovenere doesn’t get that crowded but surely isn’t less beautiful. The bus line P (it’s cheaper to get a ticket in a Tabaccheria than on the bus) from La Spezia brings you along the winding streets to the little town. Here, you’ll notice the difference to the other villages close by. 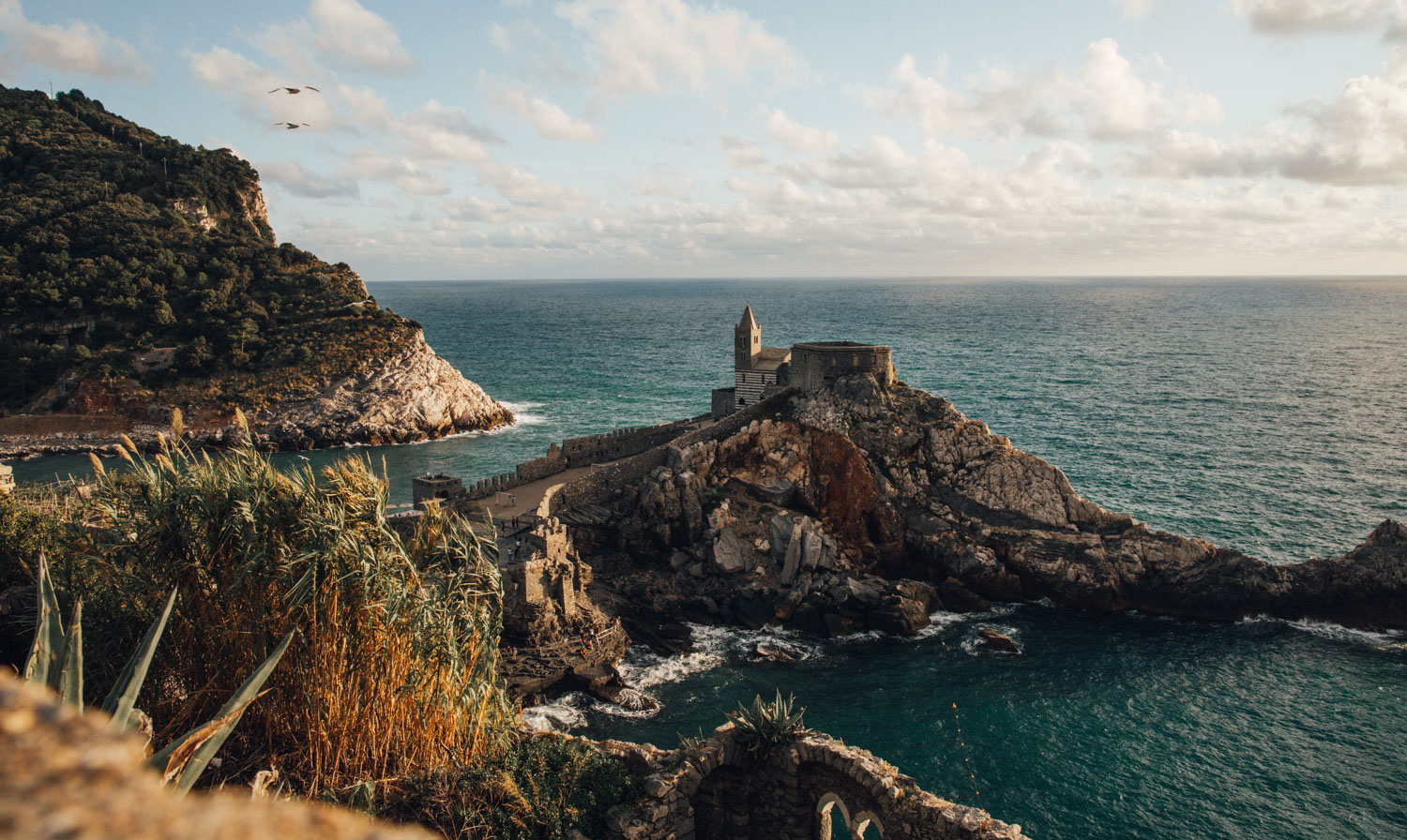 Portovenere is not as colorful and not as tiny. However, the castle and its ruins are insane. Especially during sunsets, the panorama is jaw-dropping.

Where to stay in Cinque Terre

Before we arrived in the Cinque Terre villages, we did a lot of research as we had a hard time to picture the villages. As we were traveling by car, staying in one of the above-mentioned villages was no option, as cars are practically forbidden here.

As said, the five villages are very well connected with the train. You will also reach the villages within 18 minutes by train from La Spezia. That’s why we decided to stay exactly there. Beyond being much more convenient with a car, it’s also a lot cheaper than staying in Cinque Terre itself.

Also, have a look at some of the beautiful options to stay directly in Cinque Terre. Some even have a balcony, where you could enjoy your freshly brewed morning coffee overlooking the colorful houses.

In the end, we have found the perfect place for us on Airbnb, but that always depends on what you prefer. We love to have a kitchen and cook ourselves, whenever we feel like it.

Tip: If you travel by car and decide in favor of an accommodation in La Spezia, you can park free of charge here.

How to get to the Cinque Terre villages

Easy – by train. It doesn’t matter where you exactly decide to stay, you can easily get from A to B by train. As the single ticket is with 4€ quite costly for the very short ways it might make sense to get a one or two day ticket, depending on the time you have. Be a few minutes early at the train station, then you’ll have enough time to get your ticket and validate it in one of the machines (slide it from the right to the left) after purchase.

How to get to Cinque Terre from Florence

Also easy! Train rides in Italy are incredibly easy-going, affordable and comfortable. We as Germans, where Deutsche Bahn is pretty much the opposite, enjoyed taking the train as often as possible. 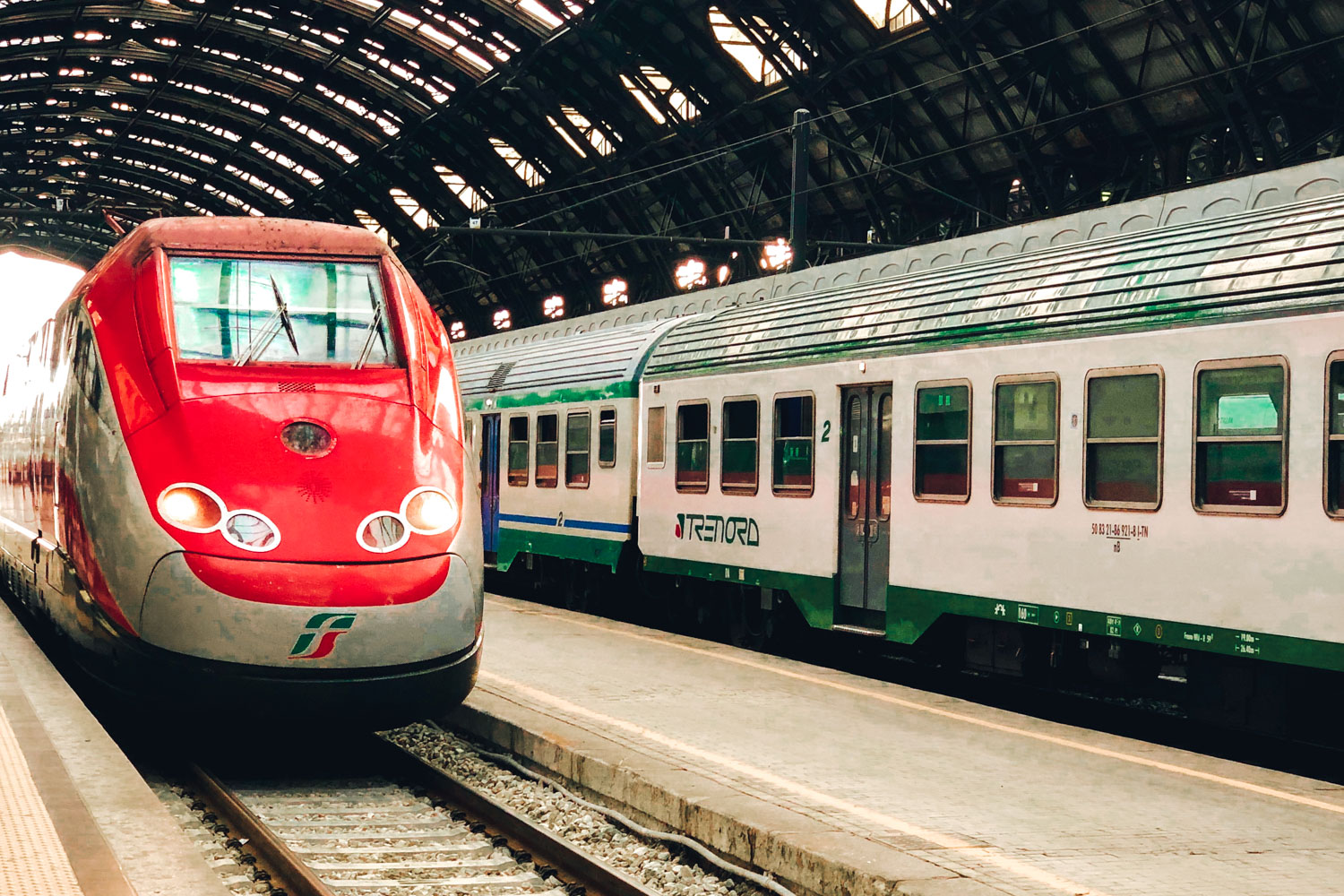 To check trains, we always used Omio. The app shows the best options from A to B within seconds and also allows you to book the tickets there. Super handy, if you ask us!

From Florence, you simply hop on the train at Florence SMN and get off at La Spezia. From there you can either continue to one of the villages or go to your flat in the town itself.

Prices here are around 20€ per person for a 2-hour ride.

How to get from La Spezia to Cinque Terre

Easy! Go to the central station, get your ticket, validate it, and relax. 18 minutes later you will arrive on Riomaggiore. Last stop of the national park will be Monterosso al Mare. So totally up to you where you get off. On your way back, the same vice versa.

In terms of the time of the year, we would advise you to skip the summer. Italy at this time of the year can be pretty crowded! Cinque Terre especially will! Spring and fall are great months to explore the region.

We traveled in Italy in September and October. Partially it was still a bit too crowded for our taste, but the early mornings and the evenings were better! Southern Europe is great in spring also! Perhaps March, April, May, and October are great to explore the region of Italy. Less touristy areas such as Sicily or the south of Italy can also be great during the summer and September (which is still considered the high season in Italy).

Side note: This spring we traveled through Portugal. If you like cliffs, the ocean, and camping, it also might be an option!

Well, that was our guide to the five colorful Cinque Terre villages. Leave a comment, if you have any tips for fellow travelers and have a great trip!

// *Affiliate-Link | When booking, we receive a small commission, without any extra costs for you!

➳ Soon going to Sicily and you are an outdoor lover? Go for a hike at the Zingaro National Park!
➳ You are eager to find the best surf down in Portugal? Surfing at the Algarve, here you go!
➳ Supertubos & Co.? You’ll find more on surfing in Peniche just here!
➳ Do you plan a short trip to Lisbon? Explore Portugal’s beautiful capital from a special angle.
➳ Portugal is not enough? Off to some waves in North Spain!

15 Things to do in Ubud – Welcome to Paradise