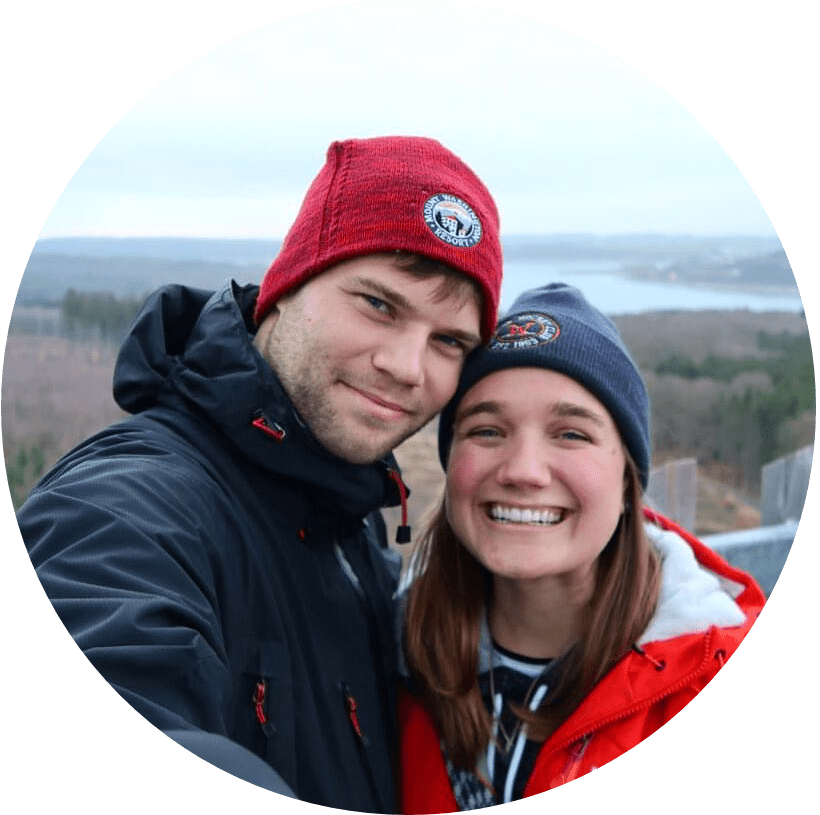 This article is written by Piero. We met him in a backpacker group on Facebook and exchanged some thoughts on traveling. Now we are very happy that he shares his highlights on Hawaii with us. The islands in the middle of the Pacific Ocean are really impressive and the more you read or see about the more you want to go to Hawaii.

This is not just a travel report. Actually, I’m in Hawaii for work, but maybe I should mention a few words how I got here before I start. I’m a scientist, vlogger, and YouTuber. Though mostly, I am a student, studying geosciences and to be more precise, I am specializing in tsunami hazards. That is mainly the reason why I got the opportunity to travel to many places (like Chile, New Zealand, California and Hawaii), the other one is that I always had “wanderlust”. Let’s start with some facts before we continue to the highlights on Hawaii: It is the probably most know island chain in the middle of the Pacific Ocean, consisting of eight islands of which you can visit just six. All the islands are volcanic islands with the Mauna Kea being the highest Mountain within the Pacific (and actually the highest mountain in the world bottom to top). These are all “googleable” facts, but Hawaii is the one of the only places on earth you really can relax and lose connection to the craziness and the problems of the outside world because you are so far away from everything. Really far away… the fastest you can get there are almost five hours from California by plane. And that is what I did. 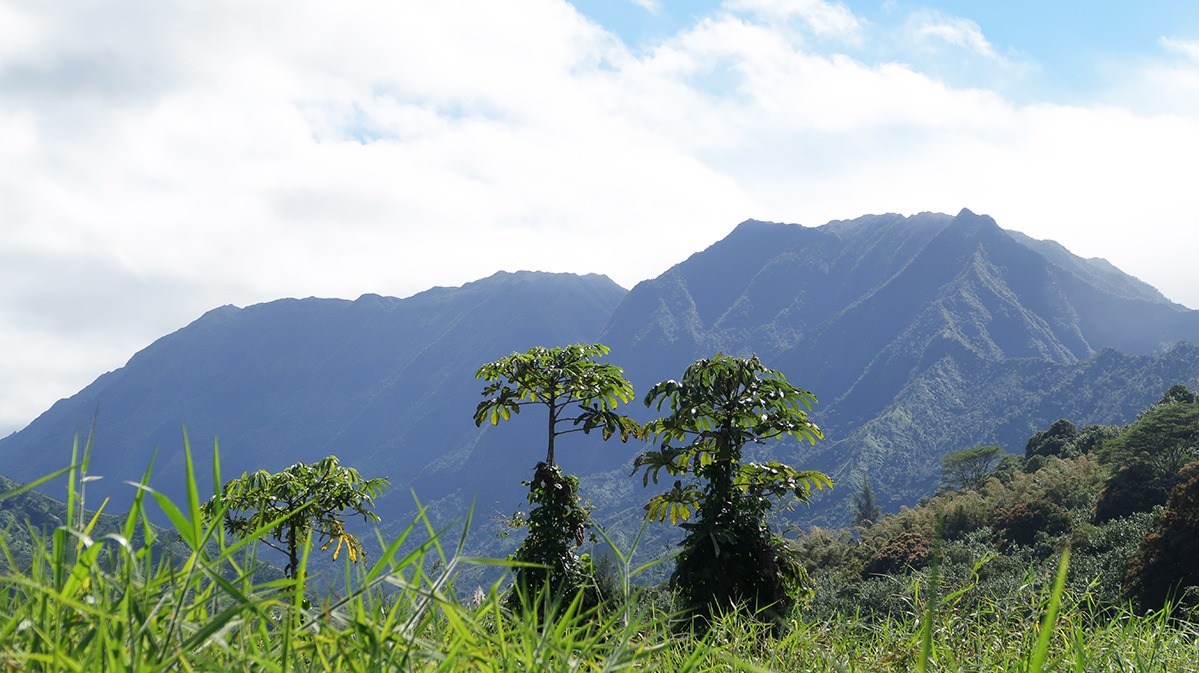 Flights to Hawaii and Island-hopping

My trip started on 23th January with booking the flights. I had to take a deep breath… Flights to the islands are extremely expensive, and even worse I just booked a couple of weeks before. The only upside on this is that the island hopping is actually pretty cheap. With up to 100$ you can fly to almost every island, but you probably have to stop over in Honolulu, O’ahu. My destinations this year: Kaua’I, the garden island and O’ahu, the gathering place.In the fall 2015, I visited Kaua’i and Hawai’i – the big Island.

Housing and food on Hawaii

On most islands, you can purchase camping licenses at the local authorities for a couple of dollars, which is cool because there are beaches and National Parks where you are allowed to camp close to the ocean. However, the rangers control the beaches strictly, even if you sleep in your car you need a camping license.Most backpackers prefer hostels while travelling, unfortunately are hostels not necessarily everywhere, but are usually just within the larger cities (like Honolulu, Hilo, Kahului) and hotels are in general very expensive. The top choice when traveling in a group is therefore to rent a vacation house right at the beach. We did this on all our trips so far and was definitely one of my highlights on Hawaii. 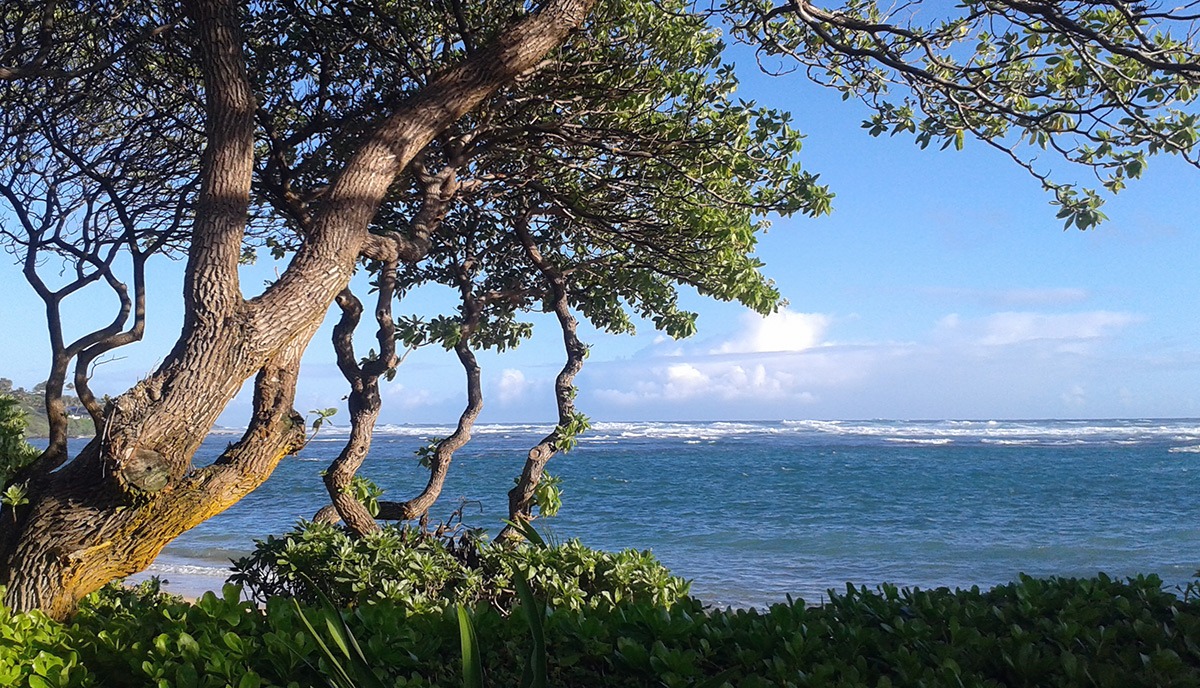 Hawaiian food is influenced by the Asian cuisine (mainly Japanese) and is dominated by seafood. Poke is my absolute favorite, it is a raw fish salad based on ahi (Tuna). Another traditional food is poi, which is a pudding-like dessert made out of the taro plant. I had to get used to the consistency but the taste combined with bananas and coconuts is fabulous. And meat-lovers will be happy with the “Loco Moco”, a pork steak topped with a fried egg and gravy, usually served with rice.

Food trucks have usually the best food deals and offer a variety from fish tacos to curries. Groceries and food, however, are significantly pricier compared to the mainland of the US, because almost everything on the islands is imported (besides the fruit and seafood). A helpful tip I learned is to stock up on groceries right after arriving at the airport in larger cities, especially when planned to stay at more remote places where the deli stores are not as well stocked.

Traveling on the island is fastest by rental car, however, many young people hitchhike or do a bike trip- my personal favorite because the islands are not that big. Anyways, traffic from and into the cities can be very busy as well at the popular tourist spot. There is no good season to recommend for Hawai’i because there are no real seasons, even though some locals walk around with a sweater in January when it is “just” 25°C outside. The only season that matters for Hawaiians and many tourists is the surf-season which can be categorized mainly into 3 main seasons: The winter season, spring-/fall season and the summer season.

The winter season (November-March) is the peak season of professional surfing, when at the North Shore the swells can get up to 30ft and the world championship competitions take place. During this time, it might be the busiest on Hawai’i, especially on O’ahu, because it is winter everywhere else (more tourists) and summer in the southern hemisphere (bad surfing conditions, so that pro surfers come to Hawai’i). 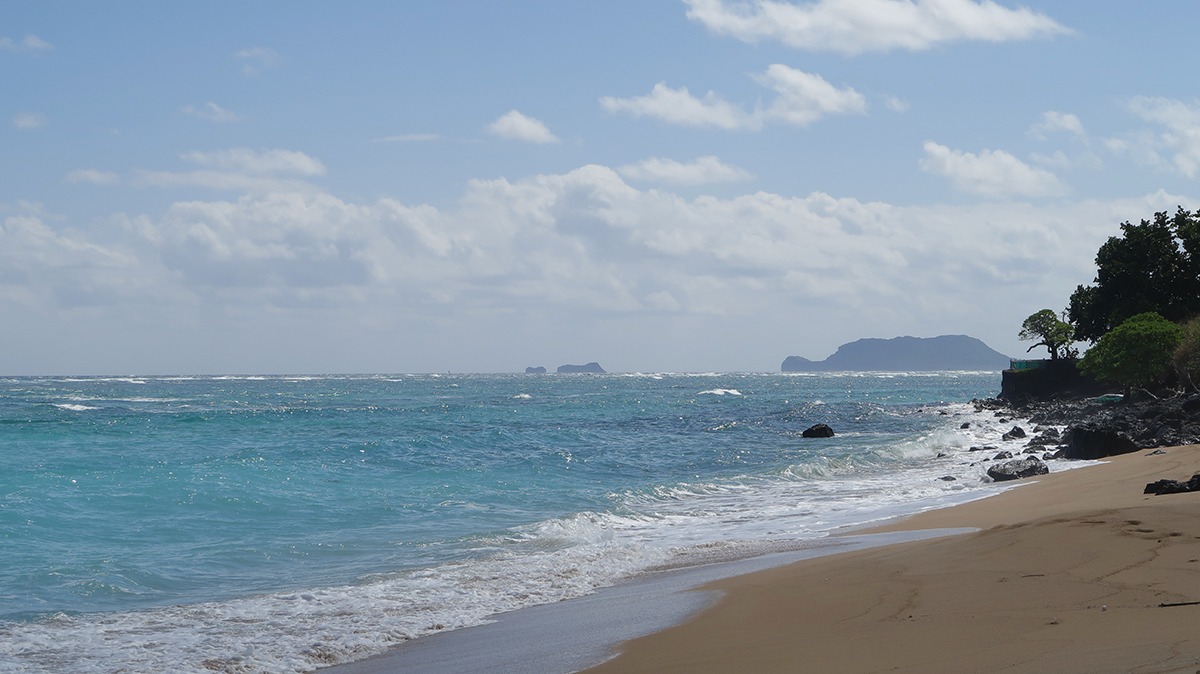 Spring (March-May) and fall season (September-November) are similar and the best time for normal surfers with moderate swells. While the summer season (May-September) is the worse time to go surfing, even though most of the surf movies seem to promote that surfing is a board shorts and bikini summer sport (which it is not!). Even though it is the worse surf season it still will provide great surfing conditions for beginners and normal surfers. And don’t think the water will be empty, during the school break all good surf stops will be crowded by local kids who will show you how to surf looks like!

Swimming and snorkeling is possible 365 days a year in Hawaii. Water temperatures ranges between 26-32°C all year long, but a Hawaiian woman gave me a good advice this year: “Never swim somewhere where you don’t see Hawaiians go in the water.” That has several reasons: There are very strong currents at some beaches and coves as well as beaches known for higher shark populations (usually sharks show up around sunrise and sunset close to river mouths).
Maui, Moloka’i and O’ahu are known for their great snorkeling and diving location with fantastic reefs and exotic fish. While surfing is in general best at the north shores, snorkeling is better at the southern and western coastlines, due to calmer water conditions. Definitely one tip for the highlights on Hawaii: Take a helicopter ride on either Kaua’i or Big Island Hawai’i. Very expensive but a great experience for sure.

Kaua’i might be the least crowded and most nature-lover island, with its wide, green valleys in the North and the Grand-Canyon of the Pacific (Waimea Canyon) in the South. This is the reason why the island is Hollywood’s favorite for filming fantastic movies like Jurassic Park. Therefore, a day or even multiple day hike in the Nā Pali Coast State Park and a visit and hike in the Waimea Canyon State Park must be on the list visiting Kaua’i.
Other good sites to visit on Kaua’i: 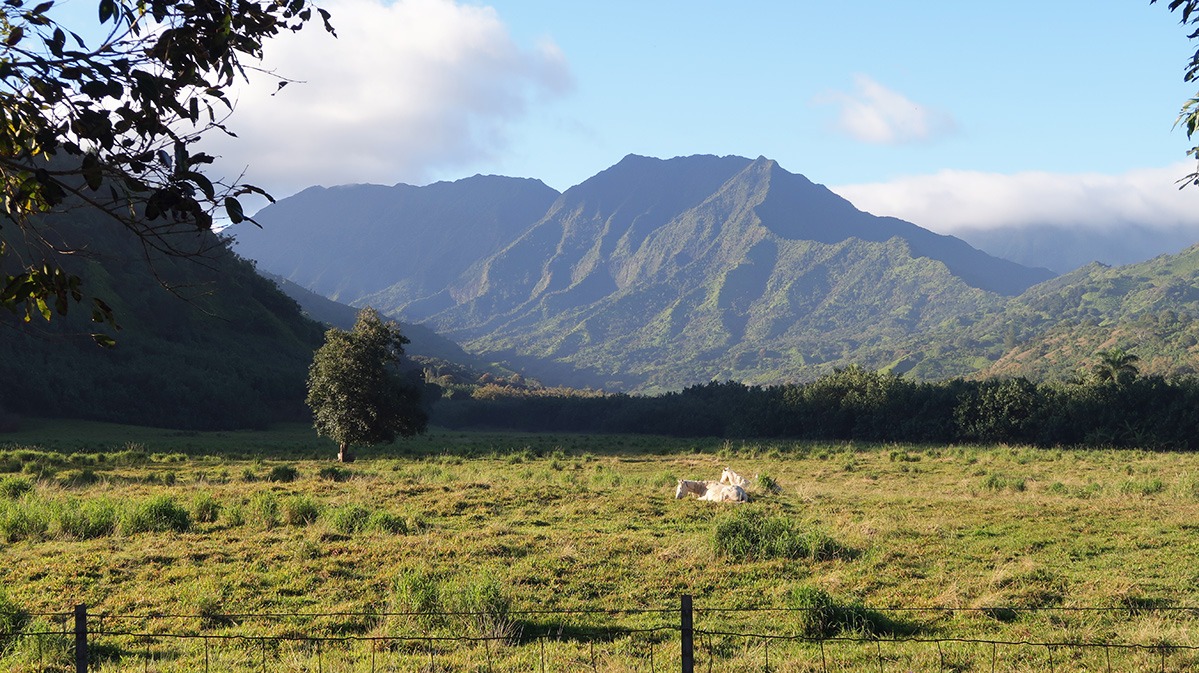 Those who love crowded places and big city life should visit O’ahu. The largest city, Honolulu, has a proper skyline right at the beach and historic places like Pearl-Harbor, though, O’ahu is probably the least “vacation” island of all of them. Who wants to have it quieter should head North to the Northshore surf spot, which can be very crowded places during winter too.
Places to visit on O’ahu you shouldn’t miss out are: 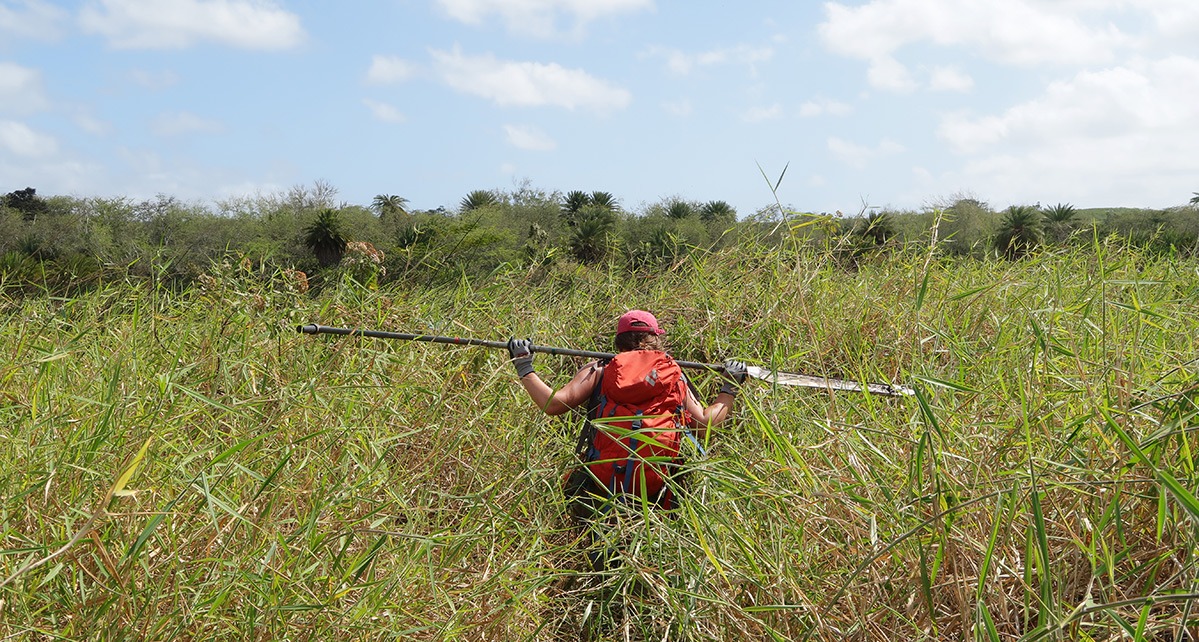 When traveling to the Hawai’ian islands don’t miss out on Hawai’i itself! The secret island is for a reason a special island for the Hawai’ians. With a little luck and the right timing, the formation of the islands is visible for everyone visiting the Kilauea Volcano National Park. In recent years, the volcano was active at least once every year. And if the trails around the lava-fields are closed (due to gas fumaroles) you should consider taking a helicopter ride over the crater of the Kilauea.

An off-road vehicle should be the preferred choice for this island, because it is required to drive up Mt. Mouna Kea to the Observatories. But be careful and don’t underestimate the height of 4,000 m (13,000 ft) because up there the chance of getting the mountain sickness is pretty high, especially when driving up within an hour! But the view on a clear day is breathtaking!

From personal experience I would recommend as well the green sand beach, but don’t be a fool like me and try to drive the 4 km off-road to the beach if you have no experience driving off-road. Many tourists get stuck there. But on a regular base locals drive in and take you with them for 10$. Or you just go cliff diving at the southernmost point in the US at South Point which is located close to the green sand beach. 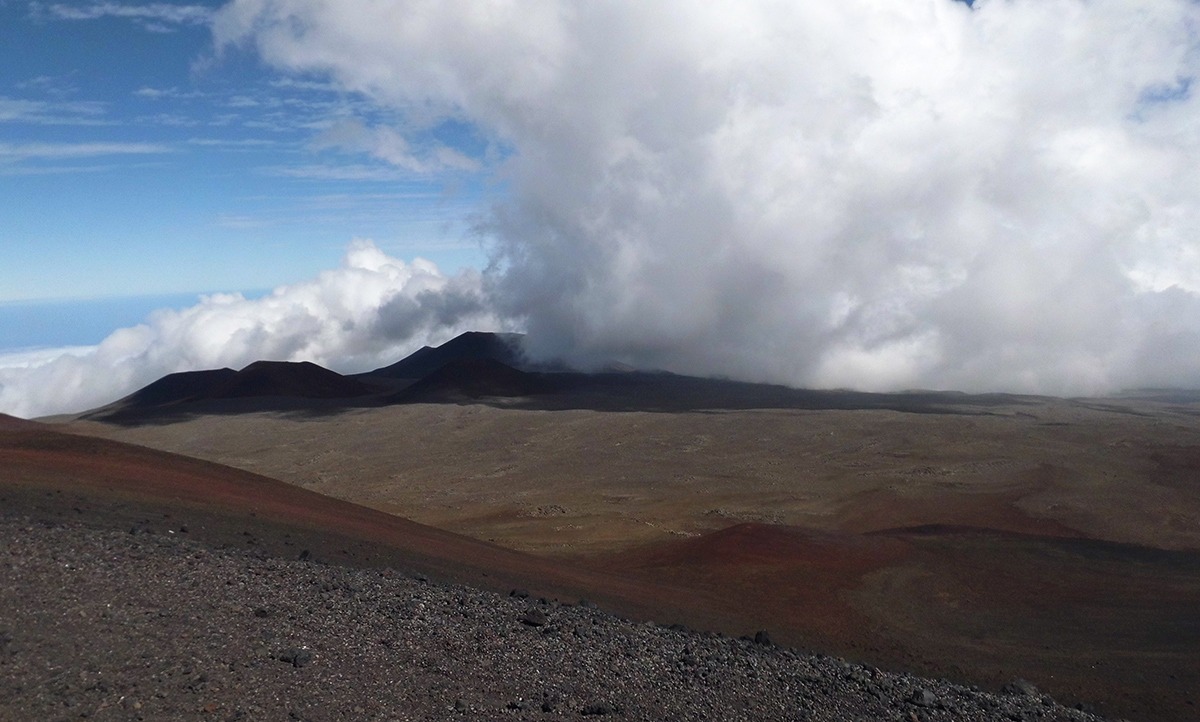 Other sites to visit on Hawai’i are:

I hope I was able to give you some insights of the life on the island in the Pacific Ocean. Perhaps you are also eager to travel to Hawaii. Are some information missing here? If so, leave a comment!